For some macroeconomic applications it might be interesting to see whether a set of obserable variables depends on common drivers. The estimation of such common factors can be done using so-called factor analytical models, which have the form

The above model is static in the sense that it does not allow for autocorrelation of the factors. However, for time series applications it is common to model the factors by assuming an autoregressive process:

To ensure that DMFs can be estiamted from a mathematical perspective, some identifying assumptions need to be made. A popular approach is to assume that the covariance matrices of the error terms \(u_t\) and \(v_t\) are diagonal, so that they only include the variances of the variables. Furthermore, the matrix of factor loadings \(\lambda\) is assumed to be lower triangular with ones on the main diagonal. For example, the measurement equation of a DFM with \(M\) observable variables and 2 factors could be written as:

Since version 0.2.0 the bvartoolspackage can be used to estimate dynamic factor models as described above using Bayesian inference. The implementation follows the Matlab code privided in the online annex to the textbook of Chan, Koop, Poirier and Tobias (2019). The following application is a reproduction of exercise 18.4 in the textbook, where quarterly time series data on 196 macroeconomic variables is used to extract a common factor for the US. The prepared data set is contained in the package.

Following the logic of the bvartools package, the estimation process is divided into four parts. First, using gen_dfm an object is created, which contains all information required by the estimation algorithm. For the current application we set the number of factors to 1 and the number of lags in the transition equation to 1 as well.

Second, add_priors is used to add prior information to the model object. We use the same priors that as in Chan et al. (2019).

Third, we obtain posterior draws, where the researcher can either implement her own algorithm or use the simple Gibbs sampler that comes with the package. For this application, the built-in sampler is used:

Forth, evaluate the results. Currently, the package only allows to plot the factors: 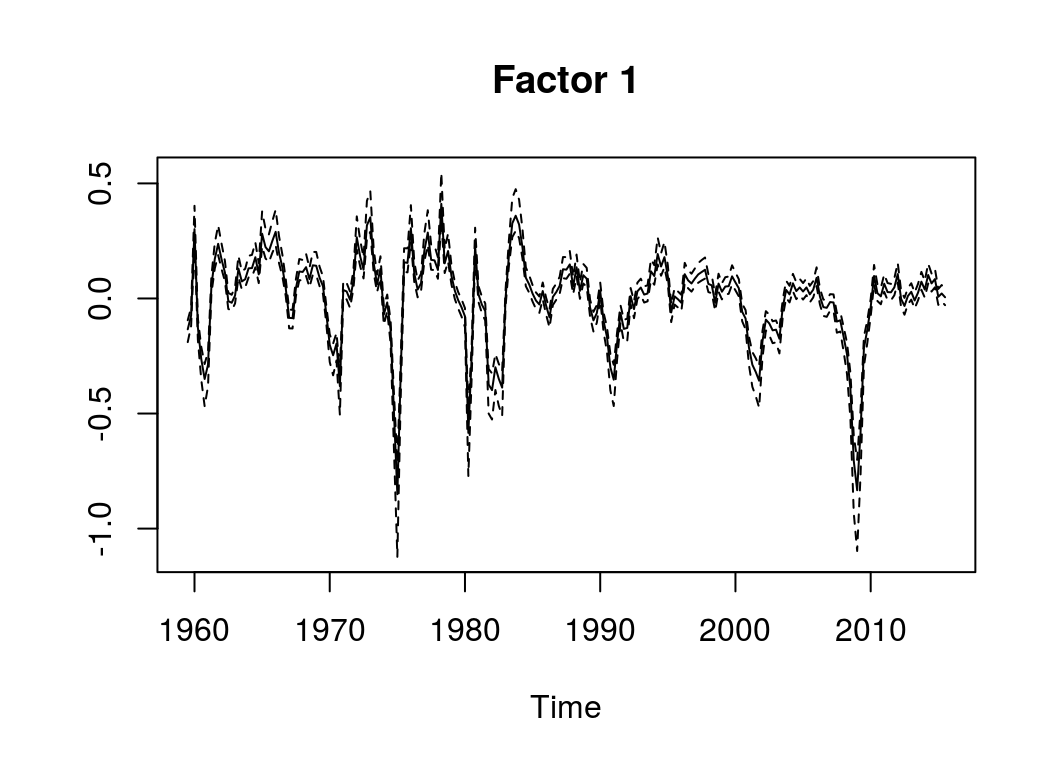