Impulse response analysis is an important step in econometric analyes, which employ vector autoregressive models. Their main purpose is to describe the evolution of a model’s variables in reaction to a shock in one or more variables. This feature allows to trace the transmission of a single shock within an otherwise noisy system of equations and, thus, makes them very useful tools in the assessment of economic policies. This post provides an introduction to the concept and interpretation of impulse response functions as they are commonly used in the VAR literature and provides code for their calculation in R.

To illustrate the concept of impulse response functions, examples from Lütkepohl (2007) are used. The required dataset can be downloaded from the textbook’s website. It contains quarterly, seasonally adjusted time series for West German fixed investment, disposable income, and consumption expenditures in billions of DM from 1960Q1 to 1982Q4. 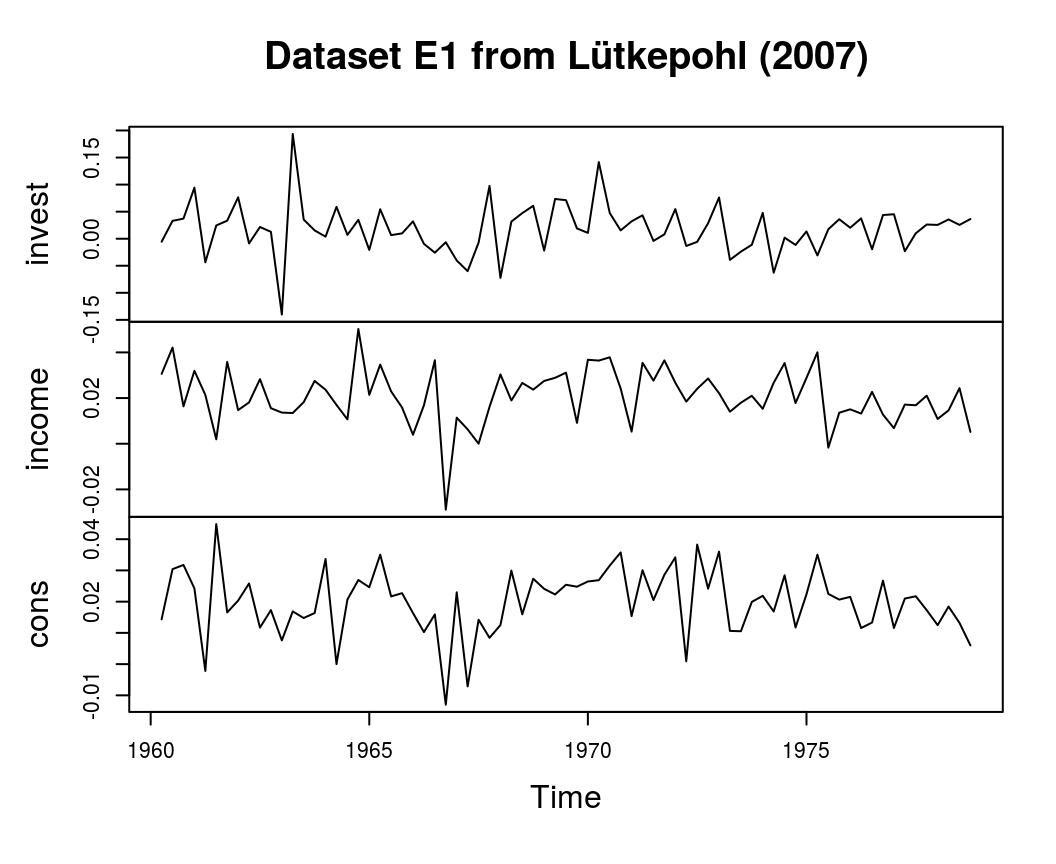 This data is used to estimate a VAR(2) model with a constant term:

The VAR model can be estimated using the vars package of Pfaff (2008):

The results of the code should be identical to the results in section 3.2.3 of Lütkepohl (2007).

Since all variables in a VAR model depend on each other, individual coefficient estimates only provide limited information on the reaction of the system to a shock. In order to get a better picture of the model’s dynamic behaviour, impulse responses (IR) are used. The departure point of every impluse reponse function for a linear VAR model is its moving average (MA) representation, which is also the forecast error impulse response (FEIR) function. Mathematically, the FEIR \(\Phi_i\) for the \(i\)th period after the shock is obtained by \[\Phi_i = \sum_{j = 1}^{i} \Phi_{i - j} A_j, \ \ i = 1, 2, ...\] with \(\Phi_0 = I_{K}\) and \(A_j = 0 \text{ for } j>p\), where \(K\) is the number of endogenous variables and \(p\) is the lag order of the VAR model. 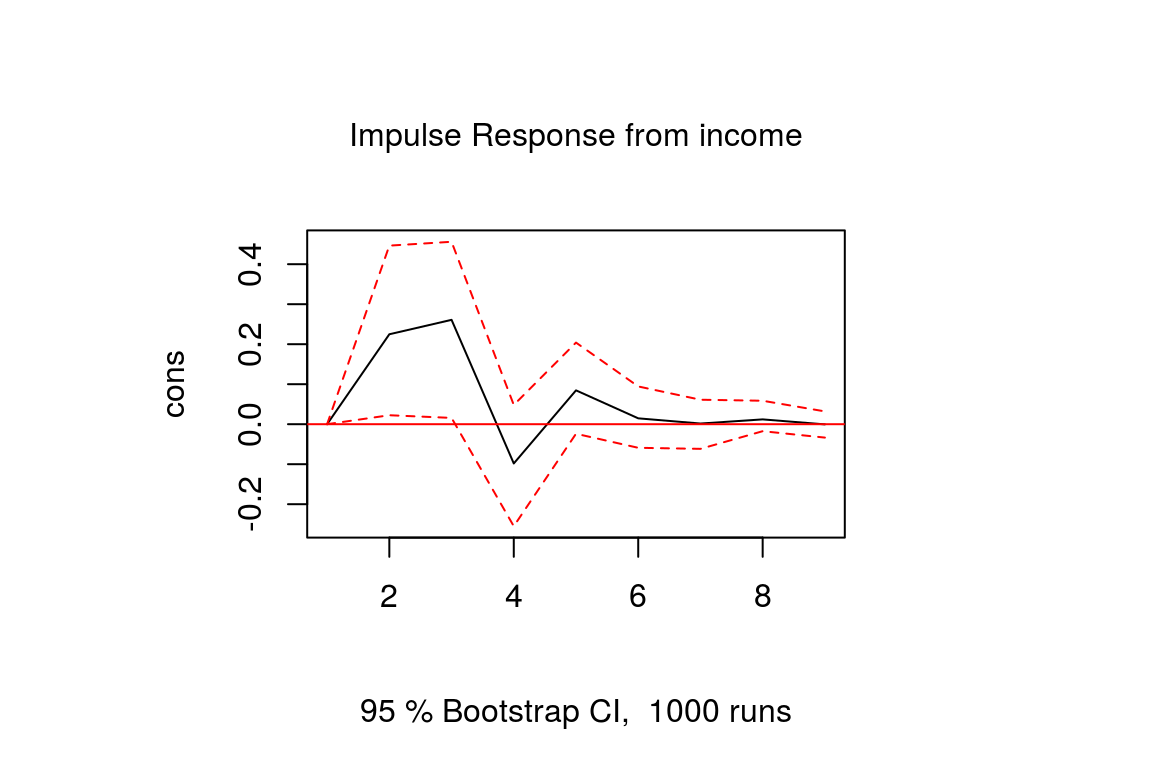 A caveat of FEIRs is that they cannot be used to assess contemporaneous reactions of variables. This can be seen in the previous plot, where the FEIR is zero in the first period. Mathematically, this can be explained by the fact that for the construction of \(\Phi_i\) only the coefficient matrices \(A_j\) are used, which contain no information on contemporaneous relationships. Information no the latter is rather contained in the off-diagonal elements of the symmetric variance-covariance matrix \(\Sigma\). For the used dataset it is estimated to be

Since the off-diagonal elements of the estimated variance-covariance matrix are not zero, we can assume that there is contemporaneous correlation between the variables in the VAR model. This is confirmed by the correlation matrix, which corresponds to \(\Sigma\):

However, those matrices only describe the correlation between the errors, but it remains unclear in which direction the causalities go. Identifying these causal relationships is one of the main challenges of any VAR analysis.

Regardless of the specific methods used to identify the shocks of a linear VAR model, further information on contemporaneous relationships can be introduced to the FEIR by simply multiplying it by a matrix \(F\):

A common approach to identify the shocks of a VAR model is to use orthogonal impulse respones (OIR). The basic idea is to decompose the variance-covariance matrix so that \(\Sigma = PP^{\prime}\), where \(P\) is a lower triangular matrix with positve diagonal elements, which is often obtained by a Choleski decomposition. Given the estimated variance-covariance matrix \(P\) the decomposition can be obtained by

From this matrix it can be seen that a shock to income has a contemporaneous effect on consumption, but not vice versa. The corresponding orthongonal impulse response function is then

In R the irf function of the vars package can be used to optain OIRs by setting the argument ortho = TRUE: 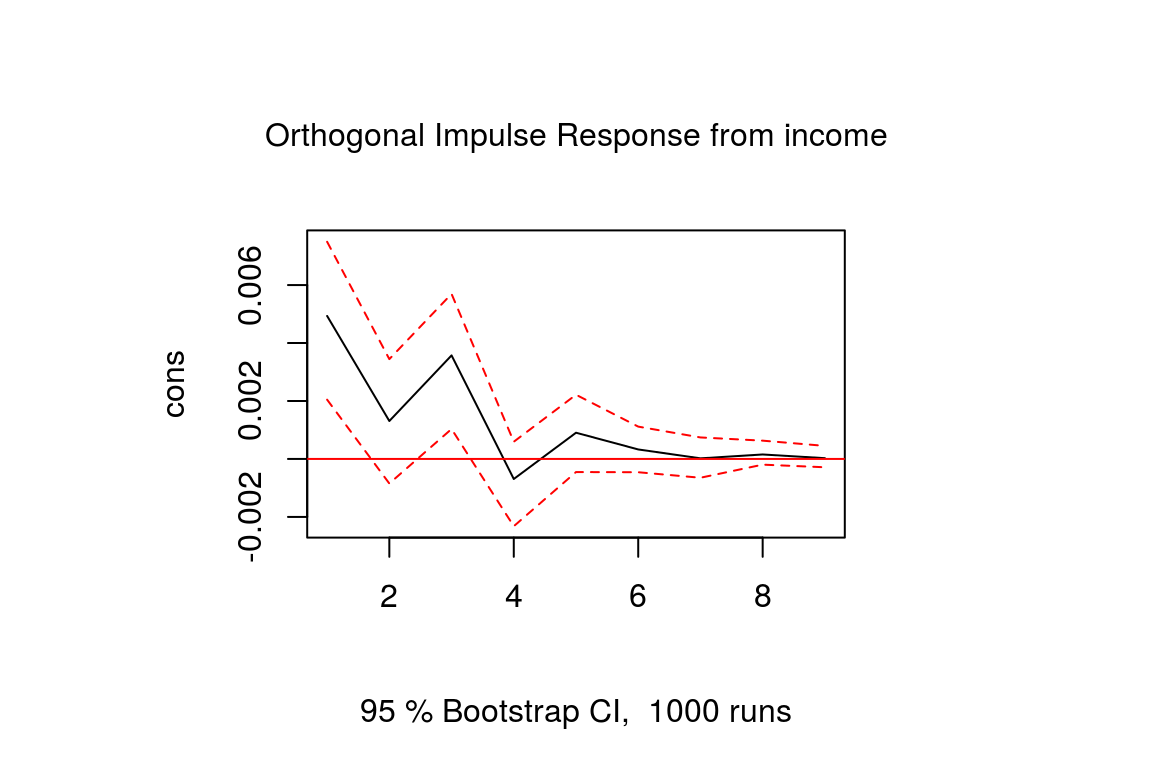 Structural impulse responses (SIR) already take the identification problem into account during the estimation of the VAR model. For the structrual vector autoregressive (SVAR) model

GIRs are very useful in the case of large systems, where structual relationships are hard to identify. They cannot really be interpreted as structural impulse responses, but they provide an accurate depiction of the historic development of the variable.